I have to admit that Victoria's Secret is one of my favourite places to window shop.  What's funny though is that I don't really look at their lingerie so much.  I love their make-up and clothes!

Take a look at this pretty summer dress:
﻿
﻿

It's on sale right now for almost $70.  As much as I love VS, I would never pay that much for a tube dress.
So here's my version: 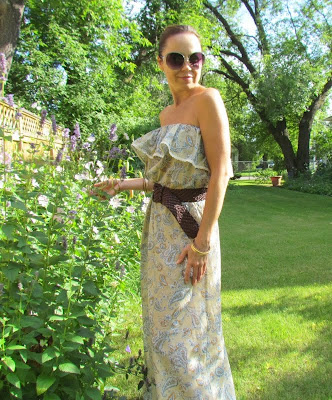 I didn't use a pattern.  I just made one long tube for the body and layered another shorter on the top for the ruffle.  Then I hemmed it, made an elastic casing in the top, and voila it was done.

Well, actually, it did sit on my sewing desk for far too long because was paralyzed with indecision on two fronts.  Whether or not to add an empire or regular waist and whether I wanted a simple rolled edge or if I should add some lace to pretty it up like the VS version. 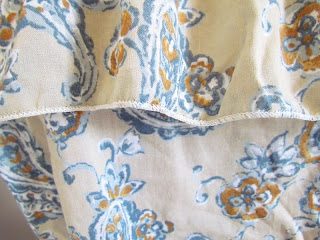 Eventually I told myself to get on with it and just did a rolled hem with my serger.  But I wore it once and realized instantly that something was missing so I added some pretty crochet lace to the ruffle. 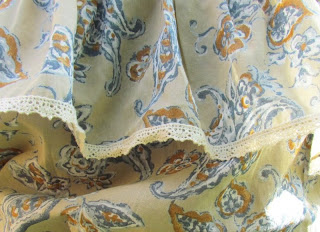 Instead of any waist at all I just added a belt.  I think this'll give me some flexibility in styling it.

I used a really thin cotton batik print so it's great for those days that are super hot but I still want to be covered up and girly.

If I had a bit more fabric I would've done another ruffle on the bottom hem but I like it as is too.

Now if I could just get the golden Victoria's Secret glow, come hither stare, and super sexy  hair! 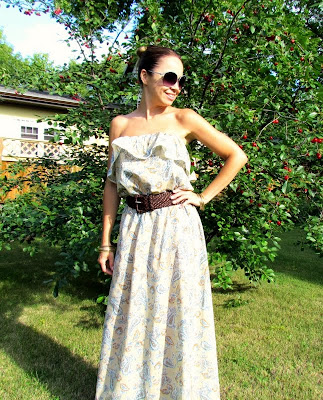 PS...don't you just love my crazy big sunglasses???  I had an empty spot on my Sunglass Holder and just had to fill it~

I love window shopping at VS too! There clothes make me think there is a chance that I could be sext again . . . some day! Love the dress . . . was it a simple sewing project?
Thanks for sharing!
-Amanda
www.theivycottageblog.blogspot.com

Your dress turned out so nice. I made a halter top this style not long ago from a pillow case (huge sham). It was a breeze once I got past all the stupid mistakes.

wow - so cool. You could make these o sell, it is so on trend!

I have that dress pinned!! I LOVE it. Your version is beautiful!

This is beautiful...I may need to make one of my own :)

Very pretty! I wish I could so more than straight lines (aka pillows and drapes). Stopping by from Shabby Creek Cottage.
Jen
Scissors & Spatulas

Wow...You did that with out a pattern...I'm so impressed!!!
Denise

Great! I'm so going to make this. Thanks for idea!

Love your version for the dress and it looks great with the belt.

your version is very sweet...well done and thanks for sharing at fridays unfolded!

Gorgeous!! I love this style on a maxi dress.

Wow - yours is lovely, just as good as VS and like you I'd not pay $70 (or our £ equivalent!) for a dress I love your big sunnies too, you look fab

So cute! I LOVE the long dresses....but since I'm only 5', they look horrible on me! You did a great job. I really need to practice my sewing!

LOVE IT!! you look amazing, as always. So excited that your blog is growing. you are so talented..
Hugs
Anne

You are so clever! It looks great!

Soo soo soo awesome! Love the fabric you chose and it looks amazing on you! Hope you will share with my Pink Hippo Party @ http://pinkapotamus.blogspot.com/2011/08/pink-hippo-party-42.html

I love this dress! I wish I could sew!

I love this! I am so making it (whenever I have a chance - hahahha!). You have the greatest creations - I love stopping by here!
Thanks! :)
Carla
http://mrsnonoknows.blogspot.com

Love this! You are so talented. I will make one too. I would love to to a post on it, and you are my inspiration. We would be so happy if you would come and link up at our first ever link party, Crafty Lassie Tuesdays. http://sewstylishboutique.blogspot.com/ Thanks Rose and Heather

I love this dress. I love VS clothing, too. Their makeup and skin care lines are awesome.

Hello
Just wanted to let you know that I have featured you on my blog. If there is anything you would like me to remove, please let me know

OMG! This dress is amazing too! You are super talented.

I just found my biological sisters and I have 3 of them and a BUNCH of nieces! (I have a son) I'm sooooo excited to finally have someone to sew dresses and things for! One of my sisters and her 2 daughters are tall and VS model thin, so these will be super adorable on them!