Tell a Tale: Hotel on the Corner of Bitter and Sweet

“I try not to live in the past...but...sometimes the past lives in me”
― Jamie Ford, Hotel on the Corner of Bitter and Sweet 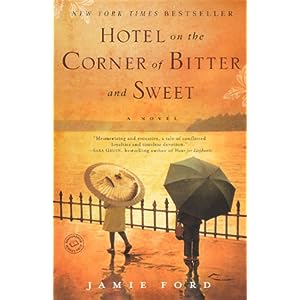 Summary (from Goodreads):
In the opening pages of Jamie Ford's debut novel, Hotel on the Corner of Bitter and Sweet, Henry Lee comes upon a crowd gathered outside the Panama Hotel, once the gateway to Seattle's Japantown. It has been boarded up for decades, but now the new owner has made an incredible discovery: the belongings of Japanese families, left when they were rounded up and sent to internment camps during World War II. As Henry looks on, the owner opens a Japanese parasol.

This simple act takes old Henry Lee back to the 1940s, at the height of the war, when young Henry's world is a jumble of confusion and excitement, and to his father, who is obsessed with the war in China and having Henry grow up American. While "scholarshipping" at the exclusive Rainier Elementary, where the white kids ignore him, Henry meets Keiko Okabe, a young Japanese American student. Amid the chaos of blackouts, curfews, and FBI raids, Henry and Keiko forge a bond of friendship - and innocent love - that transcends the long-standing prejudices of their Old World ancestors. And after Keiko and her family are swept up in the evacuations to the internment camps, she and Henry are left only with the hope that the war will end, and that their promise to each other will be kept.

Forty years later, Henry Lee is certain that the parasol belonged to Keiko. In the hotel's dark dusty basement he begins looking for signs of the Okabe family's belongings and for a long-lost object whose value he cannot begin to measure.

Set during one of the most conflicted and volatile times in American history, Hotel on the Corner of Bitter and Sweet is an extraordinary story of commitment and enduring hope. In Henry and Keiko, Jamie Ford has created an unforgettable duo whose story teaches us of the power of forgiveness and the human heart.

Review:
The backdrop of Japanese internment camps is heart breaking but I felt like this story was told from a very simplisitic point of view. Perhaps that's the point because the main character is a young child throughout much of the book but even the scenes that take place later in time, in the 1980's, were just too cut and dry, problems and mysteries too easily solved, and characters just a little too perfect.

Other reviewers have pointed out several anachronisms in the scenes from the 80's, maybe these deviations from history are why it never really felt like the 80's while that part of the story was being told.

This is a love story, and the reader should be focused on the relationship between Henry and Keiko. However, I found myself much more interested in Henry's friendship with Sheldon. I loved their reactions to others when they travelled to find Keiko. They were two outcasts united in a place where their usual day to day threats no longer existed. I wish this had been explored much more.

I found the ending quite disappointing, like I had invested and committed to reading the whole entire book just so that I could make up my own ending. I'm not a big fan of books that do this. If I'm being told a story, tell it to me, don't leave me to wonder what becomes of it all. You can only do this with a book if you've given your readers enough content throughout so that they can fully create an alternate universe in their mind, then they can imagine the outcomes. This book just didn't have enough meat in it for me to completely immerse myself in the lives of the characters.

If you're a sucker for a love story then pick this one up, but overall, this was just OK for me~

so nice to 'meet you'... I'm completely inspired by your blog!! I love arts and crafts, but am usually so caught up in the fun of it I forget to snap a photo of the process. I recently picked up back-packing, and hiked the Grand Canyon. Hiking in the Canadian Rockies is on my bucket list, my parents did that for their honeymoon. Sorry, I know this is off topic of this post, but I was super excited. Can't wait to read more... and p.s. your book reviews are lovely, I enjoy reading and nothing is better than a good recommendation.

Wow! I'm so glad I found this. I found this book at my public library on the shelf of books for sale. It was a quarter. I read the book and thought was very engaging. Just that is based in fact is of interest to me. My mother-in-law is 88 years old, and can clearly remember her friends and neighbors being rounded up to be sent to the camps. I was glad I could share the book with her. Those events really happened and lots of other tragedies, too. This book was a clear telling of the story.

I read this book. I then shared it with my mother-in-law. She is 88. She can very clearly remember when her friends and neighbors were rounded up to be sent to the camps. People who had been good American citizens and even born here.Such tragic things happened back then. Let's hope we learn from the past.