Tale a Tale: The Boleyn King

You may recall...I love historical fiction. 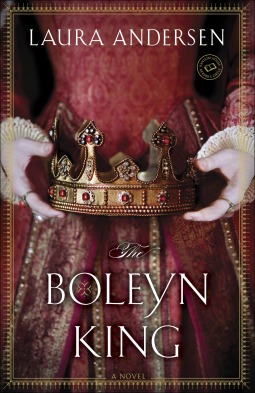 Summary (from Goodreads):  The Boleyn King is the first novel in an enthralling new trilogy. Reimagining history in sumptuous detail, Laura Anderssen takes readers back to the deadly intrigue, turbulent affairs, and treacherous passions of Tudor England - and answers the compelling question What if Anne Boleyn had given Henry VIII the son he so desperately wanted?
Just seventeen years old, Henry IX, known as William, is a king bound by the restraints of the regency yet anxious to prove himself. With the French threatening battle and the Catholics sowing the seeds of rebellion at home, William trusts only three people: his older sister Elizabeth; his best friend and loyal counselor, Dominic; and Minuette, a young orphan raised as a royal ward by William's mother, Anne Boleyn.Against a tide of secrets, betrayal, and murder, William finds himself fighting for the very soul of his kingdom. Then, when he and Dominic both fall in love with Minuette, romantic obsession looms over a new generation of Tudors. One among them will pay the price for a king's desire, as a shocking twist of fate changes England's fortunes forever.

Review: I originally only downloaded this book because it was the only half interesting book I could find to try out reading online. I thought the premise of a very alive Anne Boleyn raising a son to be king completely far fetched. Of course, only a few pages in, I was completely hooked and thoroughly enjoyed the rest of the book.
The characters that we are familiar with are all pretty true to what you already know and the new characters add to a fascinating "what if" scenario. What if Anne and her brother George never went to the gallows? What if Henry and Anne gave birth to a strong male heir who took after his father? What would've happened to Mary and Elizabeth!?!? The possibilities of an alternate timeline are never ending, which is why you won't be able to put this book down. (I think it's appealing to the Star Trek side of my brain!)This book is part of a trilogy and I can't wait to find book two now!

What do you think of books that play with history?  Love 'em or leave 'em?  Leave a comment.

I've always been a history nut and found many of the Royal lineage interesting to say the least. I always felt so sorry for the wives of Henry...especially Anne Boleyn. I'm so glad to have read your thoughts on this trilogy...there are times when you can become frustrated waiting for a real absorbing book to come along. I'm going to get it now!

This is on my TBR list! I am a teeny bit obsessed with all things Tudor and often find myself considering the whys and "what ifs"