Have you ever been excited to be asked to write a post about something only to find out that you're not so crazy about as you thought you would be and now you don't know how to say something nice?  That's what I'm struggling with today~

Awhile ago I told you about Cafe Press.  It's a website where you can personalize items online, they print them up, and send them to you.  Sounds simple enough, right?  I thought so too.  Instead I found the entire experience very trying and although 1 of the 3 products I wanted to get actually turned out, that only leaves me 33% satisfied.

I wanted to try out both aspects of the service by designing something myself and also getting something that was already designed.  So I ordered a T-shirt, a blank journal, and I tried to order a 2014 calendar.

The journal came out pretty much as expected.  Here's what my design looked like online: 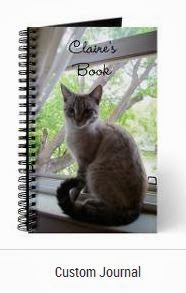 I'm a big Star Trek fan so I was really looking forward to my new T-Shirt, which was supposed to be a lovely and subdued salmon shade of pink.  Instead I got bright neon raging P-I-N-K. 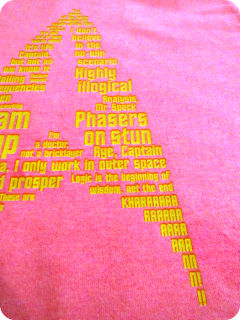 The quality of the T-Shirt is better than I expected, which was something I was worried about.  It came with a little note saying that once it's washed that the ridge along the outer edge of the design would wash away.  Mine doesn't have a ridge, however the entire front of the T-Shirt has a heavy laminated feeling so I'm hoping this will soften up once it's washed.

I can no longer find the one I ordered listed and I can't pull it up from my order but this is the shade I expected: 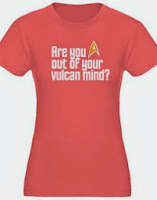 The third thing I tried to order but couldn't, was a personalized calendar for next year.  The online design software was incredibly slow to load and gave me nothing but problems.  At one point I thought I had 2014 on it but when the order went through it was 2013 and there were no options to change it.  I'm frustrated that with only 2 months left in the year that you still can't order a calendar for 2014 so in the end, after many, MANY failed attempts, I just gave up.  Luckily I was able to get my order cancelled before it went to print but I was still left pretty frustrated with the whole process.

I think the concept of CafePress is wonderful.  I tried different browsers, different designs, different computers, but I just couldn't find the magic key to make it work seamlessly for me.  However, it must work for a lot of other people because they have loads of people using it, unfortunately, I just won't be one of them.

The person who contacted me from CafePress asking me to do the post requested that the intro post be done first before any items could be ordered.  He indicated that they'd had a lot of problems with 'bad bloggers' who got the product but then didn't write the post.  I have a feeling there might be more to it than 'bad bloggers'.  I think people just don't like to blog about unpleasant experiences.

I will probably never be asked to write another sponsored post again, but I'd rather fulfill my commitment and be honest with all of you, than worry about stuff like that.

Have you ever had to write a less than complimentary post about something?  How did you handle it?  Leave a comment below~

Posted by Etcetorize at 1:00 PM

Good for you for being honest! Hopefully they will take your opinions on the experience and try to improve their services - isn't that the main idea behind having people review thing?! :) Maybe the color of the t-shirt will 'calm down' with washing as well :)

Thank you for your honesty! One of the reasons I love your blog. I've actually had similar experiences with CafePress, particularly with the sheet-like feel on the fabric printing. That was years ago but sounds like they are still using a similar technology.