Tell a Tale: An Astronauts Guide to Life on Earth

Normally I only tell you about fictional books I've read, but I had to make an exception for this book...because it's something everyone should read. 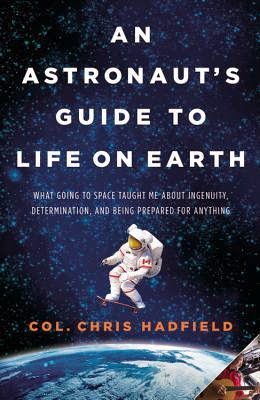 Summary (from Goodreads): Colonel Chris Hadfield has spent decades training as an astronaut and has logged nearly 4000 hours in space. During this time he has broken into a Space Station with a Swiss army knife, disposed of a live snake while piloting a plane, and been temporarily blinded while clinging to the exterior of an orbiting spacecraft. The secret to Col. Hadfield's success-and survival-is an unconventional philosophy he learned at NASA: prepare for the worst-and enjoy every moment of it.
In An Astronaut's Guide to Life on Earth, Col. Hadfield takes readers deep into his years of training and space exploration to show how to make the impossible possible. Through eye-opening, entertaining stories filled with the adrenaline of launch, the mesmerizing wonder of spacewalks, and the measured, calm responses mandated by crises, he explains how conventional wisdom can get in the way of achievement-and happiness. His own extraordinary education in space has taught him some counterintuitive lessons: don't visualize success, do care what others think, and always sweat the small stuff.
You might never be able to build a robot, pilot a spacecraft, make a music video or perform basic surgery in zero gravity like Col. Hadfield. But his vivid and refreshing insights will teach you how to think like an astronaut, and will change, completely, the way you view life on Earth-especially your own.

Review: As much as I love space, science, self-help books, and Colonel Hadfield, this one took me awhile to read. It’s not the kind of book you can breeze through. That being said, once I did finish it I felt like I had actually accomplished something.
To me, the most fascinating parts were the descriptions of launching into space and returning. I had no idea that the astronauts have to undergo so many extreme discomforts for such a long period of time to reach their destination.  (This and watching Gravity with Sandra Bullock have cured me of my interest in actually going into space in the future.)But that’s not really what this book is about. It’s about the life lessons that Chris Hadfield has learned along the way and how we can all benefit from his experiences. He’s lead an incredible life. His stepping stones would be milestones in anyone else’s life. From the moment he realized that he wanted to travel to space that’s what determined almost every decision he made. But he always seems to have had the strength of character to be prepared that should he not achieve his ultimate goal, that it was not all in vain. I think this is a concept that our “All or nothing” society could definitely benefit from.He’s quite adamant about “sweating the small stuff”, which is understandable given his vocation. It seems to be a mantra more than a message because you will see this theme come up in all of his writing, public speeches, tweets, etc. He’s the ultimate Boy Scout…Always Be Prepared.I enjoyed the book and will probably recommend it to anyone I know who enjoys self-help books, auto-biographies, or is even slightly geeky…like me~

If you go here, the Canadian Space Agency has compiled the most common questions Chris Hadfield received while in space with his answers.

Thanks for this review. I have been looking for a book for my niece's high school graduation. This one is on the list. She does love science and theology. Do you think this is appropriate as a gift?