Last weekend I found a great way to procrastinate cleaning my basement....I became obsessed with making a black blouse and could not rest until it was done. 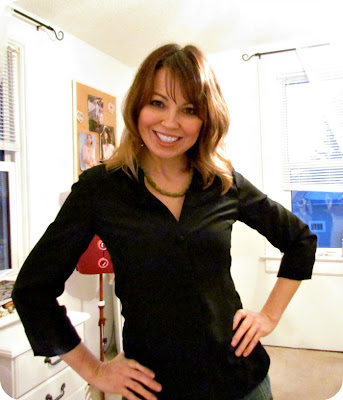 I was watching Fashion Star and although I don't really remember any of the designs anyone came up with I just couldn't get the top that Silvia was wearing out of my head.

That's not a great photo of her but she still looks totally awesome.  In my head I just remembered that it was very form fitting, verrrrrrrry low cut, and even more sexy.

Silvia is very sophisticated and on the show they always talk about her style as "European".  Who wouldn't want to look like her?!?!?

Mine doesn't really fulfill all of the inspiration points because I wanted to be able to wear it to the office, but it  is definitely form fitting.

I ended up using this pattern from Simplicity: 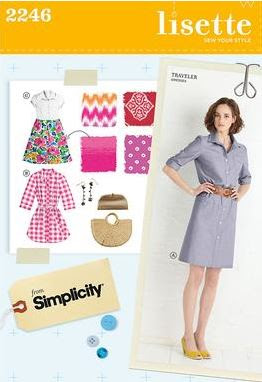 I just shortened the dress View A.

I was in such a rush that I didn't cut enough pieces for the placket and had absolutely no fabric left over.  So, I ended up making the placket a facing.  Which meant I had to alter the collar because it was too long.  So, it's not perfect, but I like it.

So, lesson(s) of the day:  take your time!  read your pattern and make sure you've cut enough pieces!  And, consult your inspiration before you make your piece...not after, as you're about to blog about it~

Your shirt looks terrific. You look very happy. Sometimes the urge to create is stronger than the urge to clean or read.