I may have mentioned once or twice that I'm a little excited to be attending the Creativ Festival in Toronto this year (please don't go on strike Air Canada!!!!).  First of all, it's been ages since I've had a holiday, and secondly I can't believe that I'm going to be surrounded by people like me who are just as obsessed interested in crafting and sewing as I am!!!

But I don't want to look like a little prairie chic walking around downtown Toronto, so I made a new fall coat especially for this trip (well, that's the excuse I'm using, but truthfully I just love making coats). 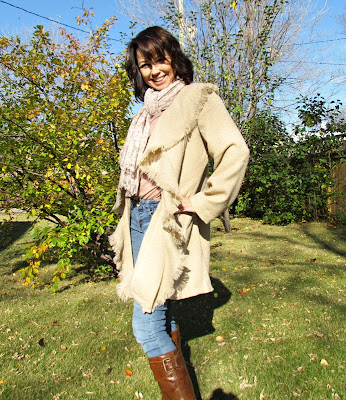 I used this pattern with a lot of alterations.
﻿
I haven't bought a New Look pattern for a very long time (except at the second hand shop) so I'm not sure if they've improved their sizing at all but they used to only go as low as size 10 in most of their patterns.  This drives me crazy because I'm nowhere near a size 10. 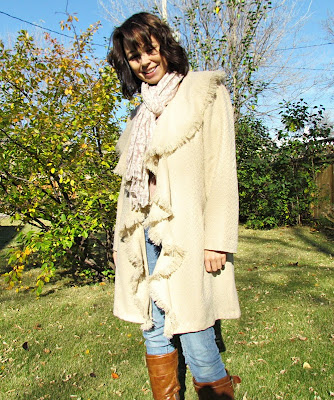 So, I took it in several inches on the sides, added darts in the front and back, narrowed the sleeves and hemmed them instead of fringing them, and narrowed the shoulders slightly.  It's still a little big but I figure that will be nice when I pull out my heavy sweaters.

I love the colour of this fabric.  And you wouldn't believe how super soft it is. 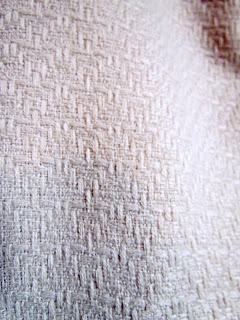 The pattern didn't call for a lining but I wanted something to shield the wind so I lined the back and the sleeves, and then I ran out of fabric. 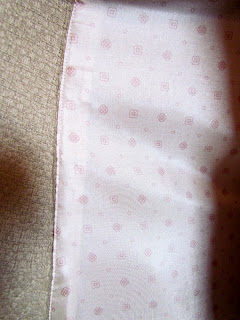 The fringing is really what makes this coat stand out.  I love it.  It took about ten times longer to do it than I thought it would but it was sooooo worth it. 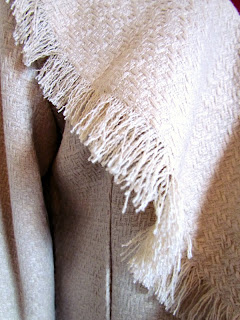 So?  Will I fit in with all the city slickers in Toronto?  I don't know if my coat is downtown chic or ranch hand trendy.  What do you think? 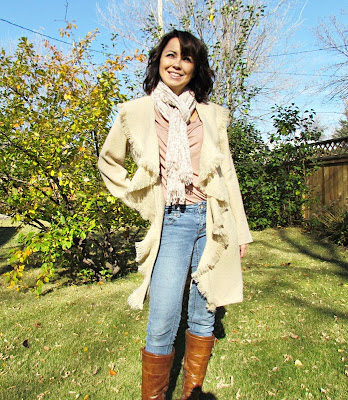 OK this is a nice jacket... but I love all your jackets!!! You are so gifted! Those city chicks won't know what hit 'em! You look fantastic. Enjoy the event. Gen

WOW that is an awesome coat and the haircut is TOOOOOO cute! love it all!!!! looking FAB U LOUS!!! hugs...

Oooh, it's a complete makeover. I love the coat and for a moment while I was looking at it thought I am going to make one too. Then I shook my head and looked at yours again,....love it. :)

The coat looks great and so do you. Love the hair cut. Anything goes in Toronto so don't worry. Right now it is 20 degrees and rain is predicted for the next few days.
Enjoy the show!

That coat is so awesome--I want one!

The coat, and your hair, look amazing!

Wow, I almost didn't recognize who that was with this new hair! Looks great on you tho :)

Your new coat is great!

with that lovely coat
and gorgeous new hairdo

thanks for sharing at fridays unfolded!

Adorable! Both you AND the coat! I just love that collar... so gorgeous!

I love your jackets. You look great no matter what the "look" is. Great adjustment to the pattern as well. Ready made patterns never fit as I'd like them to, even if they come in "my size". Thanks for sharing.

I'd love it if you linked up your jacket, along with any other tops or jackets you've made to my Top-toberfest link party. I'm celebrating tops during the next two weeks, and I'd love for you to share.

wow, what a lovely coat! i envy your talent! ;)

I like the fringing. Kudos to you! I don't think I'd have the patience it!

So cute! My goal is to make my own coat this winter but I'm scared to try. =) Your's looks fantastic!

Jessica at Me Sew Crazy said...

that came out beautiful! Well done!

That is a really cute coat! Thanks for sharing on a Vision to Remember!