I found this great book awhile ago and I've finally gotten around to trying out one of the crafts inside it: 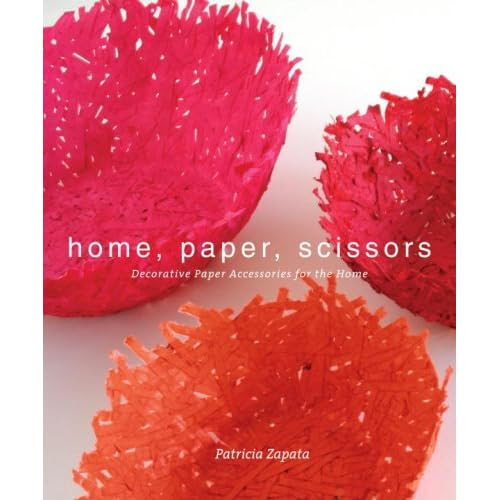 Those pretty paper bowls on the cover are what caught my attention, and they looked so easy, so I thought I'd throw some of my own together.  I have to tell you though, I think this project looks easier than it really is because I'm not totally happy with the end result.  But take a look below and let me know what you think...

Here's what you need:
﻿
﻿Steps:
1) I covered my work surface with some old newspaper so that I wouldn't get glue all over everything.  Then I took my two sheets of heavy duty scrapbooking paper to work with me and sent it through the big paper shredder so that I'd get a pile of evenly cut strips. 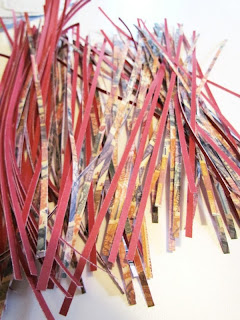 If you don't have access to a shredder you can use an electronic cutter or just do it the old fashioned way with scissors.

2) Cover your mixing bowl with plastic wrap, making sure that the entire outside surface is 100% completely covered.  You don't want glue all over your good mixing bowls. 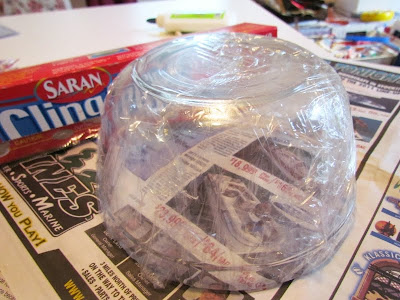 3) Next take your white glue and mix it with water in a disposable container.  The book says that it's very important to follow the recipe of 2 parts glue 1 part water and not to guess.  Of course, I guessed, which may have been my first mistake, but who wants to measure out glue in their good measuring cups?!?!? 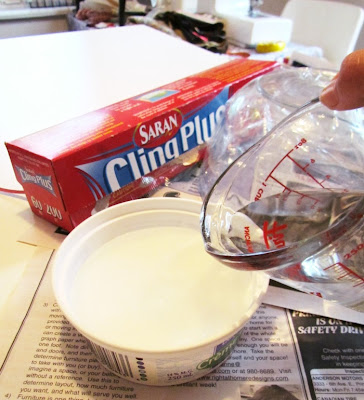 I just used some cheapo glue from the Big W and I wonder if this was actually my first mistake.  This cheapy glue was pretty watered down to begin with so I probably could've gone a little lighter on the water. 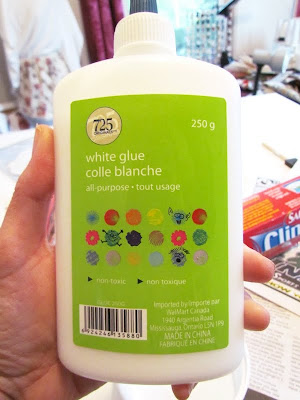 4) Anyway, onwards and upwards.... Now that your bowl is covered and your glue is mixed you can start creating your paper bowl.  Start by spreading some paste on the bottom of your "bowl mold" and add some shortened strips of paper to create a base. 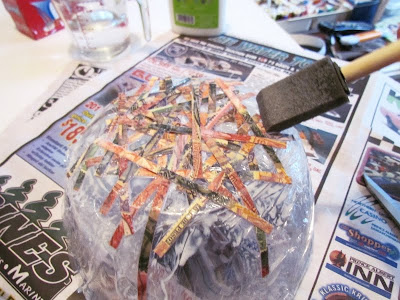 Just keep adding glue and paper until your bottom is where you want it, adding paste on the top of the paper as well.

5) Start adding longer strips to the sides, overlapping and creating interesting patterns with your strips. 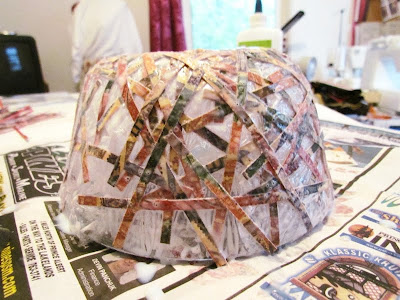 6) As I got going I realized that because the glue was so thin it was dripping right down onto the newsprint and I could just imagine the entire thing getting stuck there.  So I put a vase underneath to get it off the table. 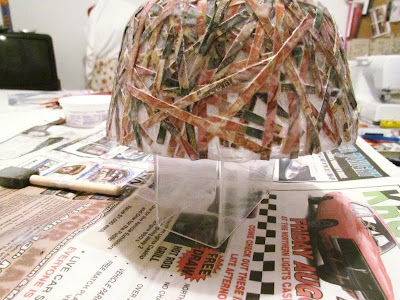 This worked well because it made it easier to rotate.

7)  Just keep adding more and more glue and more and more paper strips.  I kept going back and forth between worrying that the strange watered down glue mixture was either not going to hold anything together or that they whole thing would be so stuck I'd never get my mixing bowl back. 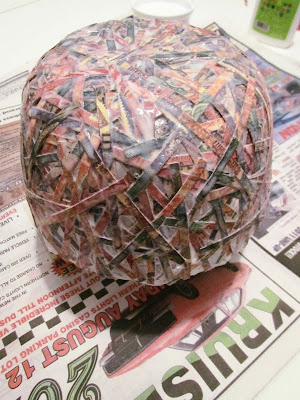 My pessimism won out and I gave some parts a coat of pure unwatered down glue.  And yes, it's possible that this was my next mistake.

In any case, I continued until the whole thing was covered and I was actually getting quite excited by what I was seeing.  Next, you just let it dry.  Mine took less than 24 hours, even with all of the extra glue on it.

8) And now for the hard part...getting your mixing bowl back from the glue gods.  I'm not sure if I wrapped my plastic too tight, if my paper was too thick, or I just used too much glue but I ended up having to use a rubber spatula to pry the papered plastic off of my glass bowl. 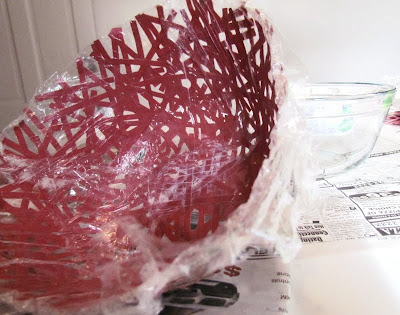 It wasn't like it was a McGyver type of conundrum but I was worried that the paper strips would tear and then KABLOOM the whole thing would blow.  Kidding, that's right I did say NOT McGyver, so no, nothing would've happened if the paper had torn except maybe a few expletives that are not meant for little cat ears.

9)  If you're able to pry the whole thing off now you have to get the plastic wrap off of the paper.  This was another worry I had, how would it not stick?!!?  It's glued down to paper! 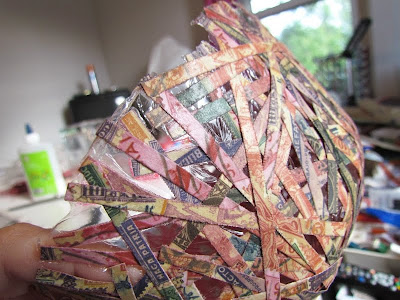 Can you see it?  I got most of it off but I still need to do some snipping.  I'm not crazy about it~

But, like I said, last night while I my fingers were already covered in glue I figured I'd experiment a bit and tried another smaller bowl using paper doilies. 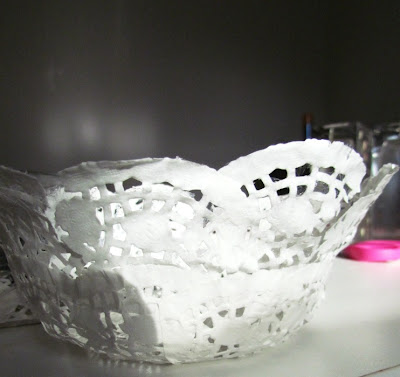 At first glance it looks pretty neat.  But here's another view: 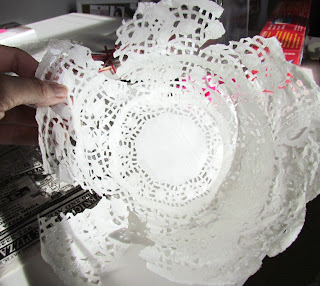 In trying to pry it off of the mold it ripped and tore apart.  When I was making it I was so pleased that the thinner paper was going on so well and creating this beautiful lacey effect.  But the thin paper turned on me and became my enemy in the end.  Boo hoo~

I had dreams of making loads of these bowls, maybe using ribbons or strips of fabric or maybe even something organic like leaves or flower petals.  Now I'm not so sure I'll give it another go.  I know, I know, try try again but I have so many other things I want to make that I think I'll actually be pleased with, so a third try on this one might not happen.

I may give the book another chance yet and try one of the other fun looking projects...we'll see.

For now, I give you my version of a paper bowl, which is probably not half as bad as I think it is right now.  I just have to let go of my vision of millions of beautiful paper bowls all over my house.  (Probably a good thing in the end.) 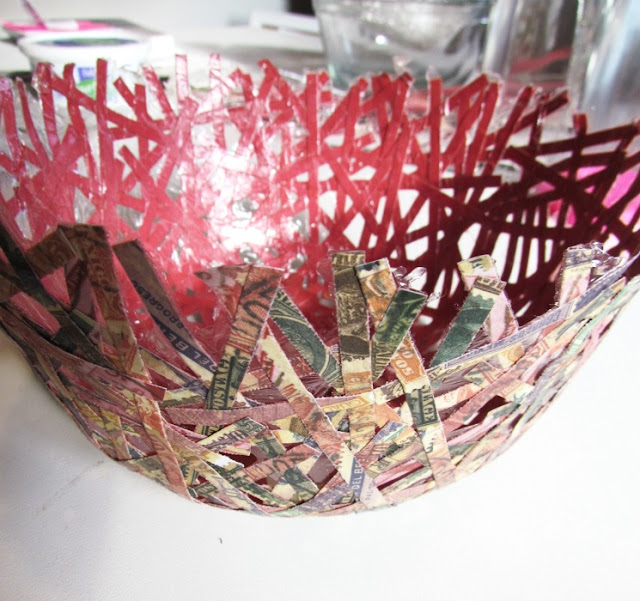 Has anyone else out there tried projects from this book?  Made paper bowls?  Any tips or tricks?  I keep wondering if this would work with Mod Podge.  I wonder if the plastic would become a permanent part of the bowl though.  Darn it, so many questions and ideas.... I may have to give this another try in the end~

WOW these are so great. I am going to try this this week..Thanks for sharing..
You have a wonderful weekend as well
HUGS,
Anne

Hey, they turned out great. It's hard to do this without getting everything stuck.

Can I offer a couple of suggestions? I hope that was a yes.

First, spray the outside of the bowl with cooking spray before you put the plastic wrap on. That sounds weird but trust me it help in the extracting part. Then spray the plastic after you get it on. This will also help when you start to remove the bowl.

Third and the best of all. Add more glue after it is completely dry. This coats the bowl with that last bit of protection. I use Modge Podge for this one (there's even one with glitter). It tends to protect like glue can't but if that's all you have it will work.

Hope this helps with your next project.

Cool with that great paper!

I just did this with tissue paper, spraying the oil adhesive is the trick! They look great tho!

You were featured on Craft Envy! Thanks for coming over to Saturday Spotlight!

I remember doing it a few years (well.. a decade) back in school. I remember using stainless steel bowl and spraying a lot of oil on it before actually sticking the paper. Since the glue won't stick to stainless steel and it was oiled, it was pretty easy to remove the paper bowl.
I made it using newspaper and then painted it to make it look beautiful. But this idea of using colored paper shreds is awesome. Will soon try it out. Thanks for sharing. Pinning it.

Your 'bowl' caught my attention via Weekly Confession Link party! I think the result is pretty awesome - based on the type of paper your choosen - and I would said it's quite well done compare to the tissue paper version!

very interesting project! i've heard of this book (source) and like the look of your results. I've been working with woven paper recently, so this look is very intriguing - nice job :) visint from Fabric Bows and more

Regardless of any mistakes you thought you made, I think it looks awesome and most definitely want to give it a try myself! Thanks for sharing!

a second layer of plastic wrap over the first layer also helps the bowl separate from the project. pehaps choose a bowl without straight sides, one with a larger opening. and cheaper plastic wrap will "stick" less to the bowl & the project.
Options: cotton thread, yarn, petals, fabric, kraft brown grocery bags, and tissue papers.

I need to check out that book...

Thanks for linking up to Creative Juice!

Great idea! i love it, thanks for sharing

I love many crafts also. One thing, you may wish to try those large balloons used for birthdays, etc. After spraying with oil and your bowl is almost dri, you just deflate the baloon and it will peel off. If you try it, I would love to see the results.