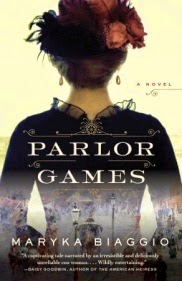 Summary (from Goodreads.com): A sweeping historical novel based on the true story of a beautiful con artist whose turn-of-the-century escapades take her around the world as she's doggedly pursued by a Pinkerton Agency detective.
The novel opens in 1917 with our cunning protagonist, May Dugas, standing trial for extortion. As the trial unfolds, May tells her version of events. In 1887, at the tender age of eighteen, May ventures to Chicago in hopes of earning enough money to support her family. Circumstances force her to take up residence at the city’s most infamous bordello, but May soon learns to employ her considerable feminine wiles to extract not only sidelong looks but also large sums of money from the men she encounters.  Insinuating herself into Chicago’s high society, May lands a well-to-do fiancé—until, that is, a Pinkerton Agency detective named Reed Doherty intervenes and summarily foils the engagement.  Unflappable May quickly rebounds, elevating seduction and social climbing to an art form as she travels the world, eventually marrying a wealthy Dutch Baron. Unfortunately, Reed Doherty is never far behind and continues to track May in a delicious cat-and-mouse game as the newly-minted Baroness’s misadventures take her from San Francisco to Shanghai to London and points in between. The Pinkerton Agency really did dub May the “Most Dangerous Woman,” branding her a crafty blackmailer and ruthless seductress.  To many, though, she was the most glamorous woman to grace high society. Was the real May Dugas a cold-hearted swindler or simply a resourceful provider for her poor family? As the narrative bounces back and forth between the trial taking place in 1917 and May’s devious but undeniably entertaining path to the courtroom—hoodwinking and waltzing her way through the gilded age and into the twentieth century—we're left to ponder her guilt as we move closer to finding out what fate ultimately has in store for our irresistible adventuress. 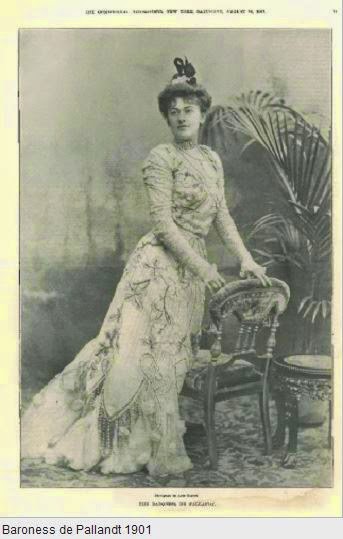 Review: Now this was an enjoyable book. I listened to the audio version and while I had a few issues with some of the voices that the narrator came up with I really enjoyed the story line and the characters.
The main character, May (who goes by various other names depending which part of her life you meet her in) endears herself to the reader instantly by constantly referring to us as "Dear Readers". You can feel yourself falling for her con but you can't help yourself, just like everyone else, you want to be around her and get to know her better.I'm not sure that I would ever want to live the life that May lives but I would probably want to be friends with someone who has the guts to go out and get exactly what she wants just like May.The plot starts out in a court setting so you know that at some point in time she was finally called out for her behaviour but the fun part is finding out how she got herself into the mess she's in. I liked how the story flipped from her past to her present conundrum in the courtroom.The only thing I had trouble with was visualizing May in the late 1800's. She just seemed far too independent and free thinking for the time. I could easily see her in the 30's or 40's and had to keep reminding myself of the time period. This is probably just my own (mis)understanding of women's standing in society at the time.Other than that, I recommend this book as a fun trip into the life of someone who thinks drama and adventure are the norm.

You can read more about May Dugas here.

Have you read this book?  Did you know that it's based a true story?  (I had no idea until after I read it and started writing this post!)  Leave a comment below~