Sandra Gulland's 5th novel is out! 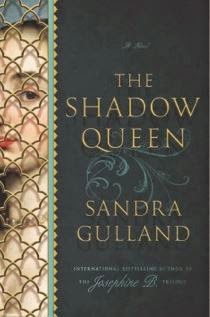 1660, Paris Claudette's life is like an ever-revolving stage set.  From an impoverished childhood wandering the French countryside with her family's acting troupe, Claudette finally witnesses her mother's astonishing rise to stardom in Parisian theaters. Claudette finds working with playwrights Corneille, Molière and Racine to be deeply rewarding, but like all in the theatrical world, she's socially scorned.


A series of chance encounters pull Claudette into the alluring orbit of Athénaïs de Montespan, mistress to Louis XIV and reigning "Shadow Queen." Needing someone to safeguard her secrets, Athénaïs offers to hire Claudette as her personal attendant.

Enticed by the promise of riches and respectability, Claudette leaves the world of the theater only to find that court is very much like a stage--with outward shows of loyalty masking more devious intentions. This parallel is not lost on Athénaïs, who fears political enemies are plotting her ruin as young courtesans angle to take the coveted spot in the king's bed.


Indeed, Claudette's "reputable" new position is marked by spying, illicit trysts and titanic power struggles. As Athénaïs begins to lose her grip on the Sun King, her use of the magical arts take a dark turn, and Claudette is forced to consider a move that will put her own life at risk.
Set against the gilded opulence of a newly-constructed Versailles and the blood-stained fields of the Franco-Dutch war, THE SHADOW QUEEN is a seductive, gripping novel about the lure of wealth, the illusion of power, and the increasingly uneasy relationship between two strong-willed women whose actions could shape the future of France.
Review: I am a BIG Sandra Gulland fan so was very excited to pick up this book. Unfortunately, it didn't fulfill all of my expectations, but that being said, my expectations were pretty high.I still enjoyed it. I just found the first half of the book a bit hard to get through. The back story is needed but it was just a bit much for me. I think this book is more for those who enjoy the details of everyday life in 17th century France.I'm more a fan of the drama and intrigue of court, which is probably why I enjoyed the second half of the book much more. That's when the main character, Claudette, joins the kings mistress Athénaïs, and the madness of court life begins. With all of the drama that goes in these women's lives, you'd think it was 100% pure fiction. Who could possibly live a life like that? But these women really existed and they really did live the unbelievable lives depicted in this book! Mistresses were honoured, babies were given up, superstitions were facts of life...it was a crazy time.In many ways this book is different from Gulland's previous writings, even though it overlaps slightly with the storyline from her last book - Mistress of the Sun. If you like Sandra Gulland's other books, and enjoy historical fiction, give this book a chance and be patient. In the end you'll be glad you did.

Do you enjoy reading about the English court or the French court more?  Do you think you'd survive court life?  Leave a comment below~