Tell a Tale: The Help

“You is kind. You is smart. You is important.”
― Kathryn Stockett, The Help

Summary: (from Goodreads):
Twenty-two-year-old Skeeter has just returned home after graduating from Ole Miss. She may have a degree, but it is 1962, Mississippi, and her mother will not be happy till Skeeter has a ring on her finger. Skeeter would normally find solace with her beloved maid Constantine, the woman who raised her, but Constantine has disappeared and no one will tell Skeeter where she has gone.

Aibileen is a black maid, a wise, regal woman raising her seventeenth white child. Something has shifted inside her after the loss of her own son, who died while his bosses looked the other way. She is devoted to the little girl she looks after, though she knows both their hearts may be broken.

Minny, Aibileen's best friend, is short, fat, and perhaps the sassiest woman in Mississippi. She can cook like nobody's business, but she can't mind her tongue, so she's lost yet another job. Minny finally finds a position working for someone too new to town to know her reputation. But her new boss has secrets of her own.
Seemingly as different from one another as can be, these women will nonetheless come together for a clandestine project that will put them all at risk. And why? Because they are suffocating within the lines that define their town and their times. And sometimes lines are made to be crossed.

In pitch-perfect voices, Kathryn Stockett creates three extraordinary women whose determination to start a movement of their own forever changes a town, and the way women - mothers, daughters, caregivers, friends - view one another. A deeply moving novel filled with poignancy, humor, and hope, The Help is a timeless and universal story about the lines we abide by, and the ones we don't.

Review:
I thought because I had seen the movie already that it might be hard to get through the book...not so.

I absolutely love this book. I love anything that can really get me to feel something 'out loud' and this book did that. There were moments that made me laugh and scenes that had great big fat tears rolling down my cheeks. I've read other reviews and critiques but I can't help it, this book really touched me. I loved all of the characters and the fact that Skeeter gets her own insight, even deeper than the racial divide, late in the book.

When I fall in love with a book, I'm in.  I'm always caught off guard when I find out that other people find fault with it.  Many people think that this book doesn't take the issues of prejudice and racism of the time seriously enough.  It may be true that characters would most likely have been introduced to much more dire consequences than what they did in the novel, but it is a work of fiction.  This is not based on fact and so I don't mind holding reality back just a bit while reading it.

Even if you haven't seen the movie, you will be able to envision each of the characters so well, it'll be as if you have.  This is another one of those books that you won't want to put down. 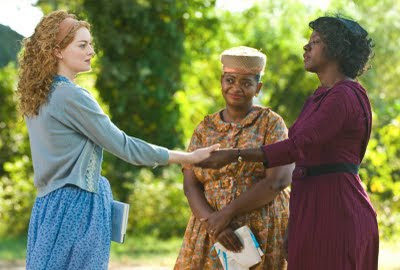 Have you seen the movie?  Make sure to take the time to read the book too, you won't regret it.  What do you think of books that are made into movies?  Does it ruin things for you or does it heighten the experience?  Leave your thoughts below~

I usually read a book before seeing the movie, but my husband kept after me to watch the movie. Since it is rare he likes a movie like this, I had to watch it . . .and watch it . . . and watch it! I have the book - saving it for a cold day when I can just sit and read it in one sitting! Thanks for a great review!