Tell a Tale: The Pleasure Palace 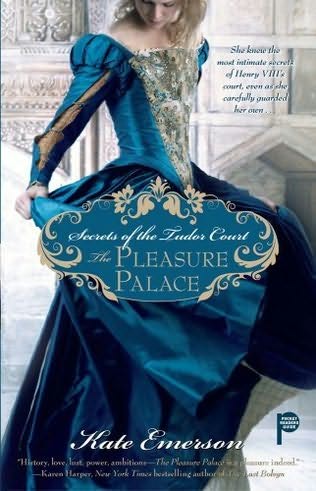 Summary (from Kate Emerson Historicals):
Jane Popyncourt was brought to the English court of Henry VII as a child to be a companion to his daughters—the princesses Margaret and Mary. With no money of her own, Jane could not hope for marriage, but as she grows into a seductively beautiful young woman, she receives flattering attention from virile young courtiers and even from the handsome new king, Henry VIII, who has recently married Catherine of Aragon. Then a dashing French prisoner of war, cousin to the king of France, is brought to London, and Jane finds she cannot help giving some of her heart—and more—to a man she can never marry. The Tudor court is filled with dangers as well as seductions, and there are mysteries surrounding Jane’s birth that have left her with deadly enemies. She must follow a perilous path in her search for answers and risk even more to have a chance at happiness.

Review:
I enjoyed this book for the most part.  The author managed to allow Jane Popyncourt to grow and mature into a young woman in a realistic way. However, like most female characters in historical fiction I think she had a little too much freedom and was a little more educated than most women were at that time. Still, I enjoyed her view of court life and the royals in general, who were portrayed as the spoiled kids they most likely were. Jane's story is intriguing and provides an interesting twist of possibilities in history if there's any possibility of the truth in it. The middle section lagged a bit but other than that it was a fun read and I intend on trying at least the next one in the series.

Note: For anyone who might be turned off by the slightly suggestive title, The Pleasure Palace is simply a nickname that the characters give to one of the royal palaces as children after the main character translates it's name directly from French.  There are a few scenes that might make you blush, but there's nothing that is overtly obscene.

There are two other books in this series: Between Two Queens, which takes place during the time between Henry VIII's wives Queen Jane and Queen Anne, and By Royal Decree, which sounds like a romance novel set near the end of  Henry VIII's reign.

Do read historical fiction?  Have you read any of these books by Kate Emerson?  Leave a comment below and tell us your tale!  Remember, you can find me on Goodreads as Etcetorize~

I too love Historical Fiction. I just read The Other Boleyn Girl by Phillipa Gregory while on vacation last week. I'll have to check out some of Emerson's books. Love your blog!!