Well, actually here in Canada we say Grad time!  Where I live we don't have prom but from all of the teen movies I've seen, I'd say it's pretty much the same thing and it's getting to be that time of year already.

At the high school that I went to the major event of the day (aside from the huge party after everything's done) is something called the Grand March.  This is after everyone's received their diploma's and the dinner is done.  After that everyone goes back to the school and gets into a ginormous line-up and parades their pretty dresses and tuxes for all to see, often to the tune of some poor bagpipe player (my grad class was over 300 people, can you imagine blowing on your bagpipes for that whole thing?!?!?).

Anyway, the girl's dresses were obviously the main attraction of the evening.  While many of the girls in my grad class spent hundreds of dollars on flamboyant gowns that they couldn't possibly ever wear anywhere ever again, I got my mom to make mine.

To prepare you for what I'm about to show you I have to preface this with the fact that I graduated quite some time ago.  As in, before the birth of things like the Internet, cell phones, and SUV's.  I'm not sure I can bring myself to admit the year out loud so I'll just show you what was going on that year: 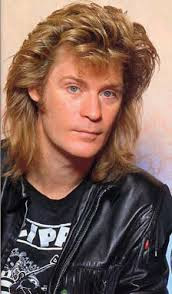 Big hair was very "in" for both men and women.
OK, now that you're prepared....here's the pattern that we used:

﻿
﻿ Peach was my favourite colour back then (and quite possibly still is today), so my mom and I picked out an affordable peach moire taffeta and some pretty lace for the train.  She altered the neckline for more of a sweetheart effect and if I'm not mistaken I think she shortened the train.
﻿
﻿﻿Believe it or not, at that time this dress was considered very simple.  Most girls had huge bustles with loads and loads of lace and bows.

And, just to entertain you, and to torture myself, I tried to fit myself into my grad dress.  My friend thinks I'm funny but this isn't the first time I've done this.  Usually it's nice to know that it still fits.  This time it was a little tighter than usual though...time to pull out the pilates dvd's again~ 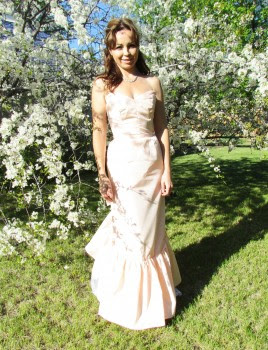 I'm not sure I could sit down comfortably in it but it still fits!!!!!! 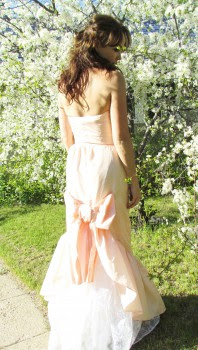 My mom did lots of sewing for me growing up but at the time this was a pretty major project for her.  I think she did an amazing job.  And I was most likely a very self obsessed teenager who never properly thanked her so...Thank you mommy! for making me the prettiest dress I'll ever own.

I cannot believe you can still fit in your prom dress. Good for you. (Your Mom did a great job.)

What a great dress. My mother sewed for me too, but could not have done that. My prom dress was in the Chinese style and cost next to nothing. We didn't get any pictures. I was a bit of a rebel.

Wow--that's great that you still look so wonderful in it!

My prom dress...well, I didn't have much notice before the event when I was asked, so I borrowed a dress. But I forgave him for it and married him anyway! ;-)

My mom made one for me in 9th grade...I don't even want to know if it would still fit. I think it's still in her house. Yuck.

Your Mom did an amazing job on your dress. That must have been a lot of work. How fantastic that you can still fit into it!
I graduated high school and university in the 1970's. Both my dresses were similar. They were jersey halter maxi dresses. Both would be fashionable right now. I am still searching for pictures.
I have made my daughters many dresses since birth. They feel that it is special to buy a grad dress from a funky store in Toronto.

My senior prom dress was the same color, with a huge skirt. I felt like Cinderella. :)

I used this same pattern to refashion a pageant dress! It is still hanging in my closet, but after two kids I am sure that it won't fit. SIGH! I guess I'd better get to the gym! Thanks for the memories!

Such a beautiful dress! I'm so glad you kept it and shared with us!

I think it's a lovely dress, even today! And GO YOU! fitting into it and looking stunning :)

It's wonderful that you still fit into your prom dress. I think this style is beautifully classic. The only thing I'd change about it is the bow in the back to something like draped rows of strongly strung pearls or braid with small tassels. Then wear it to any formal event!

BTW, I only recently found your blog and have been scrolling back through your posts. Love it!