It's time for a look back at one of my most favourite projects that I've completed over the past few years (because I wasn't organized before I left on my overseas trip to have new posts ready to go while I was away).

Mod Podge is a wonderful thing, isn't it???  Did you know that you can use it on plastic?  Don't believe me? Check out today's project!

I really needed a new shower curtain(s) (my clawfoot tub needs two).  I like to get just a plain see through curtains because, number one- no one is around to check me out while I'm in the shower so it doesn't need to be opaque, and number two-I need to keep an eye on my battling cats, even when I'm in the shower.

But plain see through can be very boring.  I thought about buying some plastic by the yard and painting it, but come on, that's just craziness when you can perform magic with Mod Podge!

Here's what you need:


Steps:
1) After I cut my shower curtain the right length for my tub I just decided which side was the outside and layed it out on the table.  The rest is just like any Mod Podge project.  Slap some Mod Podge onto the wrong side of your paper doily, working from the centre outwards. 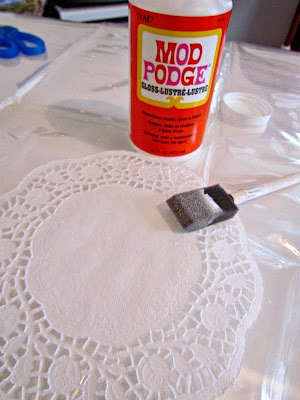 2) Randomly place your doily glue side down onto the outside of your shower curtain and then add another layer of Mod Podge over top.  The Mod Podge will dry quickly and the paper doilies are a little fragile so be patient, work fast, and don't forget to smooth out any air bubbles that happen. 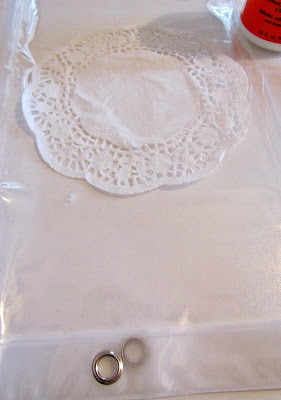 Make sure to go slightly over the edges to seal it in and get in and around all of the little openings of the doily.  Just use a damp cloth to wipe around the edges if you get too much on the plastic. 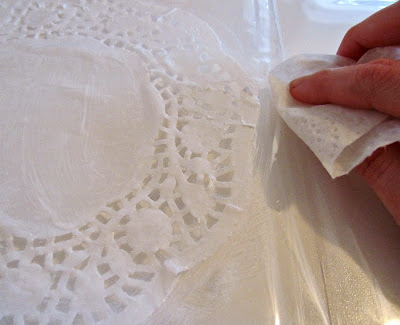 This is so beyond easy but I have to admit the first one took a little longer than I wanted.  Once I got a rhythm and a method though it was smooth sailing and I am thoroughly pleased with the end result! 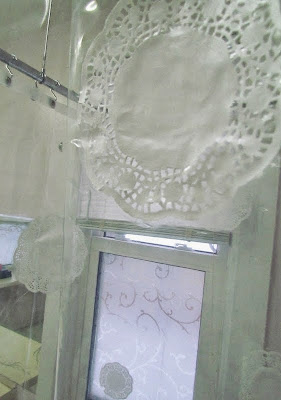 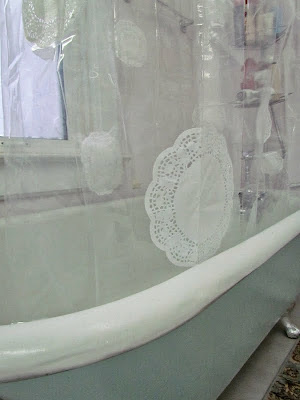 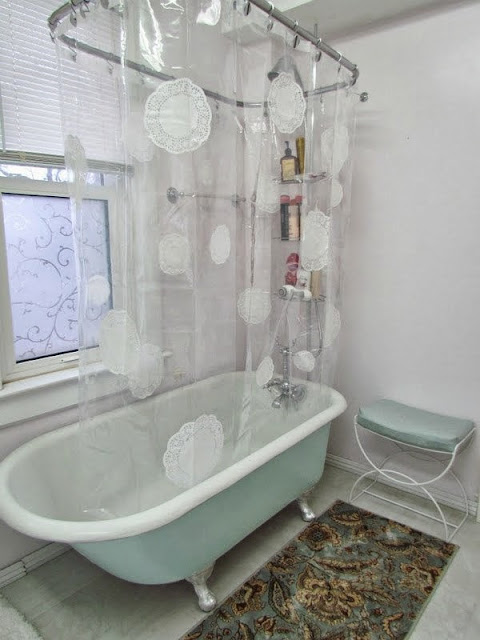 You could really go to town on this with loads more doilies.  Or you could print something on them before you glue them down.  Or try your kids fav cartoon characters printed from your computer.  I can think of so many fun ideas now that I know the Mod Podge will work on plastic!

What do you think?  Will you give your washroom a little injection of personality with some Mod Podge?  Leave a comment below and let me know what you think!

This project was featured here:

The only thing I would change if I ever make this craft again is to get a good quality shower curtain that is mold resistant.  The cheapy ones that I used here didn't get moldy but they did have to be replaced in just a few months so I had to throw all my hard work away.

NEVER would have thought to ModPodge a shower curtain! What a clever idea!