Have you ever hid something away for safe keeping so that you wouldn't lose it, only to lose your mind looking for it a week later????

That's what happened to me this week as I was preparing for this week's project.  It's still driving me a bit bonkers because I still can't find my packet of hot pink glitter.  In the end I bit the bullet and bought another packet, a girl can never have to much glitter right?  (I know there's a Mariah Carey joke in there but let's just take the high road and move on...)

So, I may have mentioned before that I don't have any kids living with me.  And that's probably the only reason that I don't go all out for Halloween.  This year though I thought I'd do at least a little something, even if it's only for the trick or treaters that come by for candy.

There are lots of sparkly pumpkins out there in blogland but I wanted to try it out with something a little less traditional.  So, I used pretty hot pinks and purples to go with the rest of the decor in my studio.  Just imagine Halloween in Barbie's dream house and then you'll get the feel for what I'm going for.

The first pumpkin I did was pretty straightforward.

Here are the supplies I used: 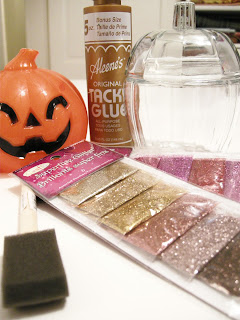 Steps
1) I started with the small plastic orange pumpkin and began by applying glue to one section of the pumpkin at a time and then sprinkling glitter on that section: 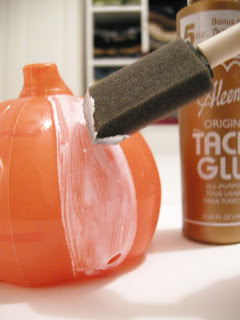 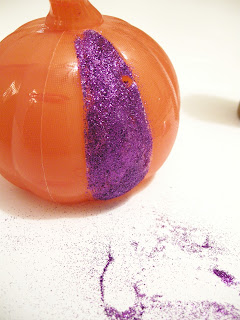 2) Repeat step one on alternate side.  I'm not sure if this is true on real pumpkins, but fake ones always seem to be divided into 10 sections, so you can line up your colours across from each other to maintain consistency and avoid running two stripes of the same colour beside one another. 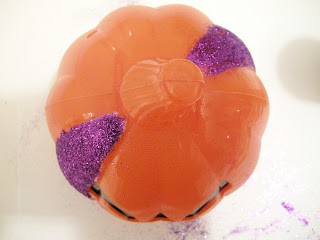 I used a dry brush when I was finished with the glittering to sweep it off the next section.  Then I had a clean area for gluing.

3)Continue this with all of the other colours of glitter that you have until all sections are covered. 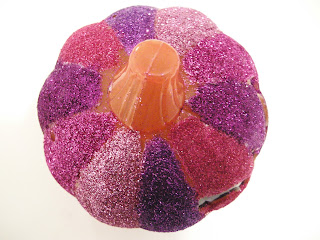 4)Top off your pumpkin with a sparkly hat and you're done!  If your pumpkin will be handled alot and if you want to keep it for more than one year, I would also add a layer of some kind of spray varnish to seal in the sparkles. 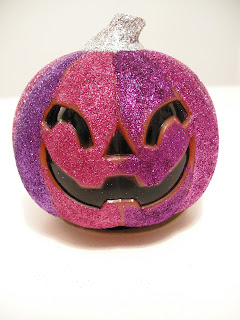 I had also picked up the little glass jar pumpkin too and thought I would do the same treatment to it until I saw this painted glass pumpkin at keen inspirations where Sharon painted the inside for a nice glowy mood.

So, I decided to give the striped glitter method to the glass jar on the inside this time.  Tacky glue dries clear so it works fine.  I do wish I had a smaller brush though, the sponge brush made things a little messy. 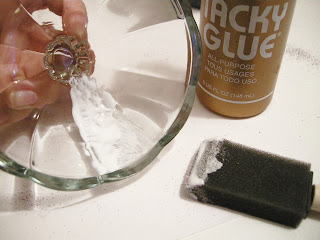 Did I mention that this project is a little messy??? 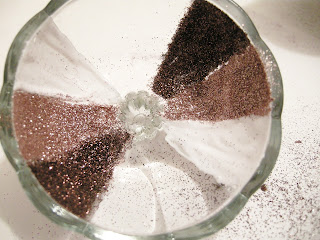 I started with the lid because I wasn't sure I wanted to commit myself to doing the whole jar on the inside.  Here's the finished lid from the inside: 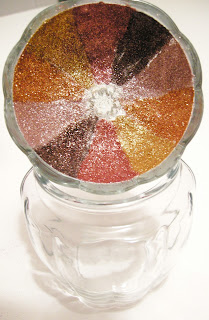 Before the glue had dried I was a bit worried about the outside.  It looked pretty bad and I kept wondering if it looked like something I would've made in grade two.  But when it finally dried, I was pleasantly surprised.  It actually glitters and sparkles on both sides! 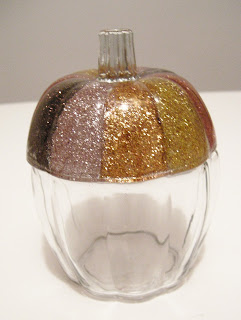 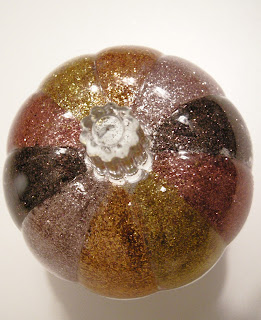 I did decide though that I don't have the patience to do the rest of the inside of the jar.  It makes it look a bit more like an acorn but that's ok.  I'm happy with it this way and now I can actually put some candies inside and not worry about them being completely covered in glitter when they come out....although, like I said earlier, you can never have too much glitter!

What do you think?  Now that I'm covered in glitter I think me and my little pumpkin buddy are ready for the disco.  Are you going to join us?


Make sure to check back next week....I'll be announcing my first giveaway for anyone who has signed up to be a follower here at Etcetorize!﻿

Between Naps on the Porch was my top referrer last week so go check out Susan's blog for more fun ideas and giveaways!


I'll be posting the disco pumpkins at the other linky parties throughout the week, check them out on the linky tab above.

Posted by Etcetorize at 7:33 AM

I like that you made this nontraditional. My favorite is the jar....I have this hideous pumpkin jar that someone gave me and I stuff it with candy. I'm going to put this on my to-do list next year. :) They're so cute!

Oh I just love this!! It's so fabulous and super creative! Thanks for sharing!!

Welcome to Etcetorize Jennifer! Thanks for signing up as a follower~

It turned out fantastic! I think the colors are great, and no, you can never have too much glitter! :)

What a great way to make a pumpkin that a little different from the traditional colours, but still lots of fun!

Love them both! I got my glitter on this year too, and it's been fun.

Ahhh! I love the uniqueness of this. (After this, I'll bet you found colored glitter in spots of your home you'd never imagined glitter could make its way.)

So cute! I just bought a TON of glitter to glue on pumpkins, and came across your blog doing a random google search...always fun to discover a fun new blog! Hope you have a good Halloween! I expect to be covered with glitter soon too when my son and I start playing with our new art supplies!