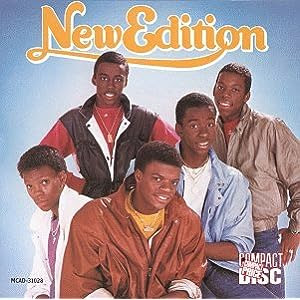 Mr. and I have a new addition to our family!  It's all very exciting and a little scary, but she's beautiful and given a bit more time I think she'll fit in perfectly around here. 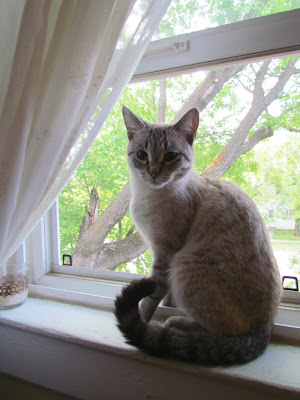 Her name is Katya, which is short for Ekaterina.  According to some dubious web sources, it supposedly means chaste.  Which I'm actually hoping is very true.

And before I continue, for all of you new Etcetorizers out there I should probably introduce you to Mr., which is short for Mr. Whiskers.  (He also answers to the name Monsieur from time to time as well.) 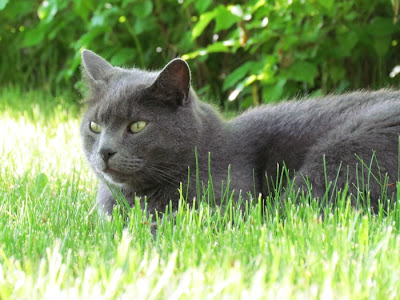 Katya showed up under my mom's shed in her back yard a few weeks ago.  She was beyond tiny and obviously hadn't eaten a good meal in a very long time.  We have no idea where she came from but, of course, we both couldn't resist feeding her, so she never left.  Who could blame her?  A little scratch behind the ears and some free kibble would do it for almost anyone.

My mom's cat wasn't interested in making new friends though.  And everyone I asked wasn't interested in taking her on so, I had a long discussion with Mr. and he agreed to give it a try.  He's such a great guy.  (He's been remarkably patient and nurturing since she moved in.  I'm not even kidding, I'm so amazed by him.)

Katya has had a pretty traumatic start to life though so she's taking awhile to warm up to him. I'm hopeful that in time the two of them will become best of friends.
﻿
Wish me luck.  So far there's only been one fur flying fight but I have to go out of town this week for work.  I'm hoping I don't come back to a house that looks like the day after a frat party.

She is a very cute little kitty and lucky to have found you.

Awww so very beautiful. I know that they will become best buds in no time.

oh my goodness these kitties are SOOOOO CUTE!!!

Beautiful kitties! Sure hope they are getting along ok ;)