In the spirit of Halloween I thought I'd share some of my past Halloween costumes with you.

I can only remember one year, when I was about 3 or 4, when my mom purchased my Halloween costume (Barbie Bride).  From then on she always made my costumes, either sewing them from scratch or using things we had around the house, and I have proudly carried on that tradition throughout the years.

I was all set to go back to my university days and share my pics with you of me dressed up as a hippie, and a vampire, and a pirate.  And then I took a look at the photos, and remembered that they were all taken in the 80's and 90's.  I realized that I 'm not quite ready to share my big hair days with all of you just yet....maybe next year.

So for now, I'll show you my top 2 favourite Halloween costumes from my past:

It's not a great picture but trust me this is a great costume!  So great that I actually call it my uniform...not my costume.  I made it from scratch with the perfect polyester fortrel and ironed on the communicator emblem.  If I could wear it on days other than October 31st I probably would.  I'm not even going to ask you if you think that's weird because I'm pretty sure I already know the answer~ 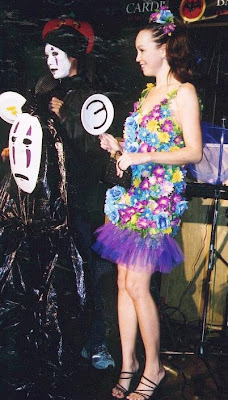 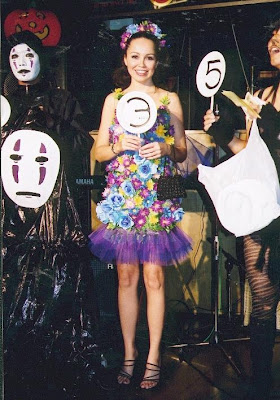 I love this outfit the most.  I just took a slip and hot glued lots and lots of fake flowers to it and then basted some netting onto the bottom.  It's so pretty!  If you look closely in the first picture you can see my home made wings too!

I was living in Japan when I made this and had only been there for a couple of months when I went to a Halloween party/dance in this.  Throughout the night people had to vote on their favourite costume and I made it to the finals!  Unfortunately I lost to a fellow dressed up as Kim Jong Il.  I'm not sure his costume would've been quite so popular or even recognizable at that time if we had been in North America but I have to admit, he really did look like him.

However, I only just noticed now that my little number card that I was holding was backwards.  Maybe I should've won after all!  Hey!  Kim Jong Il!  Get back here with my prize!

Leave me a comment and let me know what you think.  Are you a flower fairy kind of girl or would you like to spend some time with Jean-Luc Picard????? (Next Generation, I know, but don't make me get all nerdy on you and explain time travel~)

Hey you guys!  I just entered my Flower Fairy Costume into another contest.  Check out While He Was Napping and give me a vote.  I have some very, very good competition~

I could go either way on those costumes. I <3 Star Trek, but there's something to be said for flowery girlie, girl costumes. :)